You are here: Home / Exotic Rice / What is GABA rice? 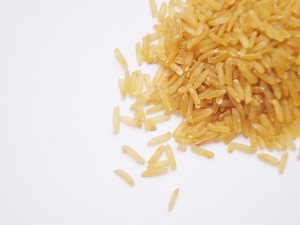 What is GABA rice? It’s a rice grain made form unpolished brown rice that has been allowed to germinate. This improves the flavor and also to increase nutrient levels such as γ-aminobutyric acid (known as GABA).

“Germinate” means its started to grow. And this is done by soaking it in warm water

GABA rice is used in Japanese and Korean cuisine, but is fast becoming popular in North America. Its health benefits are being discovered by new generation chefs and foodies looking for new ingredients to innovate with.

This germinated brown rice has a soft texture – moreso than brown rice -and a very pleasant fragrance.

It retains all the health benefits of brown rice and is usually marketed as a health food product or gourmet supergrain.

Japanese research studies unveiled at a United Nations Food and Agriculture Organization symposium in 2004 showed that sprouting rice through soaking it in warm water for between 8 to 24 hours can increase:

What is GABA rice and what is gamma-aminobutyric acid?
It’s an amino acid and neurotransmitter that is known to produce a calming effect in humans. People seeking anxiety relief often can take GABA supplements. Research is inconclusive about the ability of GABA – which has been eaten – to make it into the brain.

Some research suggests GABA can stimulate human growth hormone – via the brain area called the pituitary gland. If taken before a workout. This also suggests that it has some neurological impact.

What is Arborio rice?
How to prepare green bamboo rice

Andy Walker is a serial entrepreneur and author. He and his wife Kay own and operate CulinaryHipster.com. He is also a rabid foodie.